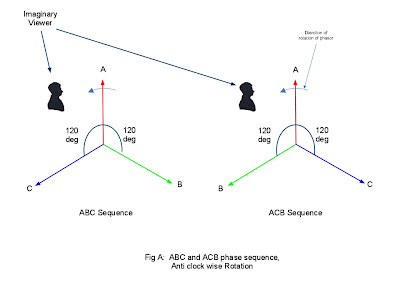 Anti clock wise is positive becasue while moving anti clock wise, increase in angle increases in magnitude, hence it is taken as positive. just refer to how Phasor of sinA is drawn in circular real and imaginary frame

if anti colck wise ABC is equivalent to anticlock wise ACB ,then why do we need both? is there any significance?

i wrote anti clock wise ACB,but it would be clock wise ACb ,plz explain that qus and furthermore if you kindly elaborately tell me the reason of only ABC and ACB sequence
i know about permutation and combination,there would be 6 arrangement possible but we only take 2;i guess a explanation but i need your answer ,kindly provide answer ASAP

HOW TO DETERMINE IF A PHASE CHANGED IN HV , HOW WILL THAT IMPACT THE LV ROTATION

Thank you for your answer.Now I knew.

Really Thanks For Very Simple Explanation , I Failed to Get Something About This Any Where Else , Thanks Again , And I Want From You One More Favour , I Want You To Help Me With a Good Book In "Power System" That Explains Everything Clearly As You Do , Thanks

i couldn't understand what do you want to say....

A generated 3 phase is meant to have 3 waveforms. Seen on an oscilloscope, it will be apparent that the 3 waveforms are spaced 120 degrees apart, and there is a definite sequence. If the waveforms are identified as A, B & C in the sequence as they appear on the oscilloscope in time, then the supply conductors supplying these waveforms must necessarily be identified as A, B & C respectively. The phase sequence now represented by ABC is now the positive phase sequence, in the sense that A is ahead in time of B, and B in ahead of C, then recycles for C to be ahead of A as the waveforms continue into time.
Once the first supply is so labelled with A,B, C, any 3 phase motor whose terminals are marked A, B, C are connected to the respective supply terminals A, B, C that rotates in the direction it has been manufactured to do (eg turn a pump or fan in the correct direction) will be regarded as being correctly wired. If not, two conductors of the motor must be swapped over and the two terminal labels swapped with the conductors. Now if the motor is reconnected to the supply, the motor will turn in the manufactured direction.
The essential requirement in all this is that a phase sequence indicator must be tested on a known supply wired up for the socket terminals A, B, C to truly provide the positive phase sequence A, B, C in time sequence. If the phase sequence indicator reads correct that it is positive ABC, then and only then can it be used to be check other supply sockets for correct wiring of the socket(s) for positive phase sequence.
KG

"The Anti Clock Wise ABC is equivalent to Clock Wise ACB. Just analyze by placing the imaginary viewer and rotating the phases in respective directions." If it is just a convention then how can this be? I thought that if you say anticlockwise or clockwise you are effectively saying that the positive degrees will be in that direction for the phasor diagram you are drawing. Furthermore, ABC clockwise and ABC anticlockwise should be the same thing. Let me know if I am misuderstanding.

"The Anti Clock Wise ABC is equivalent to Clock Wise ACB. Just analyze by placing the imaginary viewer and rotating the phases in respective directions." If the direction is just a convention then how can this be. I thought that when you say anticlockwise or clockwise you are referring to where the positive degrees will be placed on your vector diagram. For clockwise, 90 degrees is placed to the right of 0 but to the left for anticlockwise. Therefore, for both ABC clockwise and ABC anticlockwise, B lags A by 120 degrees and C lags A by 240 degrees. Furthermore, they are the same thing, just a mirror image of one another with the degrees being mirrored as well. Let me know if I have misunderstood the comment. Thanks

what are the effects of incorrect phase sequence to the three-phase compressor?

what are effects of incorrect phase-sequence to the compressor?

Atico Export are the most affordable Three-Phase Compressor Trainer providers in india.

What will be happend when the phase sequences of the bus bar and the alternator are mismatched in parallel operation of alternators ?

What will be happend when the phase sequence between the bus bar and the alternator is mismatched at the time of parallel operation of alternators?

what is the impact on the GIS equipment (ready for FAT) if the phase sequence must be changed from ABC to CBA?