The three phase transformer windings can be connected several ways. Based on the windings' connection, the vector group of the transformer is determined.

The three phase transformer primary and secondary windings are mainly connected in the following ways
The Star connection is also called Wye as it resembles the English letter 'Y'. As both the names Star and Wye are equally used we have the freedom to use them interchangeably. Of course some people also use the term 'Mesh' in place of 'Delta'. Let us first consider the Wye - Delta type where three primary windings are  connected in Wye and the three secondary windings in Delta.

For this whole article you have to remember few points below to enhance learning. It is applicable for both single unit type and single-phase bank of transformer type.

See carefully the diagram below. A2,B2,C2 and a2,b2,c2 are respectively the primary and Secondary side terminals taken out side of transformer. 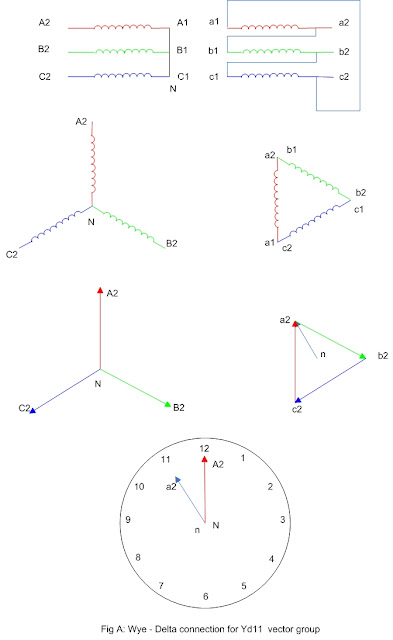 In the primary side the three windings are connected in star. So we have shorted A1, B1 and C1. This is the primary side (star side) neutral 'N'. In the secondary side the three windings are connected in delta. Here windings a1-a2 and A1-A2 are wound on the same limb of the core, so the corresponding voltage waves are in phase. Hence we have drawn a1-a2 parallel to A1-A2. similarly windings b1-b2 is drawn parallel to B1-B2 and c1-c2 drawn parallel to C1-C2. To see the actual physical placing of the windings on the core limbs of transformer see my (archived) article Three PhaseTransformer Basics. There also you can find one example for a bank of three single phase transformers used as three phase transformer.

The neutral (star point) physically exist in the star side . In the delta side physically the neutral point does not exist so it cannot be brought out. The delta side neutral is the imaginary point 'n' (geometrically found) which is equidistant from a2, b2 and c2.

The transformers are classified into different Vector Groups depending on this phase difference between the primary and secondary sides, obtained due to different connection philosophy.

IEC has devised the standard code for determination of transformer vector group.
According to IEC the code for vector group consist of 2 or more letters followed by one or two digits.


From the above three points, the first two are quite straightforward. The third one follows the clock convention as described below.

In this convention the  transformer high voltage side phase voltage (line to Neutral) represented by Minute hand is fixed at 12 O'clock position and the low voltage side phase voltage (line to neutral) is represented by the Hour hand which is free to move. Clearly when the minute hand is fixed at 12 position the hour hand can take only twelve numbers of discrete positions 1, 2, 3 ... upto 12 (think it  twice). The angle between any two consecutive numbers in a clock is 30 degrees (360/12). Hence the angle between hour and minute hands can only be multiples of 30 degrees. See the figure.

Now back to our discussion of Star-Delta transformer. We have already shown that the low voltage secondary side phasor a2n leads the high voltage primary side phasor A2N by 30 degree. (remember that the comparison is between the phase voltages). According to the clock convention this specific case represent 11 O' clock. So the above transformer connection can be represented by the symbol Yd11(or YNd11). N or n may be used for a brought out neutral. Here we will keep the material simple and will not mention the neutral symbol.

Let us change the connection slightly to get the Yd1 vector group. See Fig-B, here the primary side is as before, but in the secondary side a1 is connected to b2 etc. (compare with previous diagram). 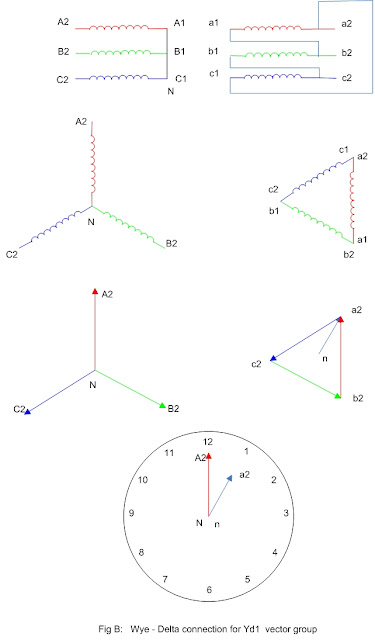 In the above diagram the individual phasors are still the same as in Yd11 case. Here we have only rearranged the phasors of delta side, only to satisfy the connection changes in the secondary side. Here the clock face indicate One O' clock. As a result we obtain the Yd1 vector symbol.

Let us consider another important connection, Primary in Delta and Secondary Star connected.

From the diagram applying school geometry it is clear that na2 phasor lags NA2 phasor by 30 degrees.

Applying IEC coding:
NA2 is minute hand fixed at 12 O' clock and na2 is hour hand at 1 O' clock (as the angle between the two is 30 degrees)

So the transformer is identified with Dy1 symbol. 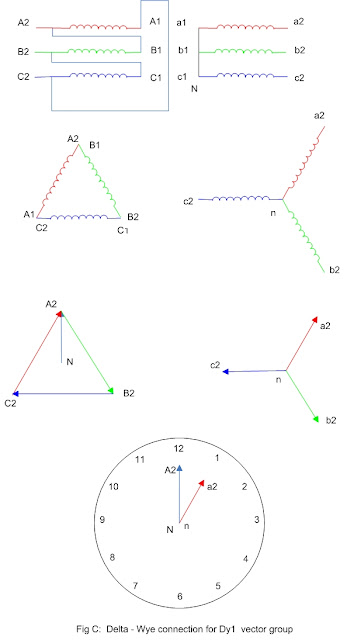 Similarly just slightly modifying the connection above we can get Dy11 notation. Here we have rearranged the windings in the primary side for connection modification and convenience. See Fig-D. 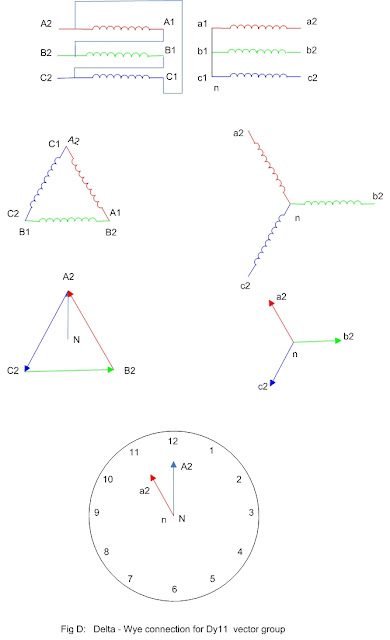 If you understand the above examples then identifying Star-Star and Delta-Delta vector group are very easy. One can reasonably say that the phase difference between the primary and secondary sides of both these cases is zero. The vector group symbols will be Yy0 and Dd0.

Remember the connections can be two different ways. Consider the Wye-Wye connection. In Yy0 (zero phase displacement between primary and secondary) secondary side neutral is obtained by shorting the terminals a1, b1 & c1 and a2,b2 & c2 are brought out terminals. In  Yy6 (180 degree phase  displaced) the neutral is obtained by shorting a2,b2 & c2 and a1,b1&c1 are brought out terminals. See Fig-E and Fig-F. 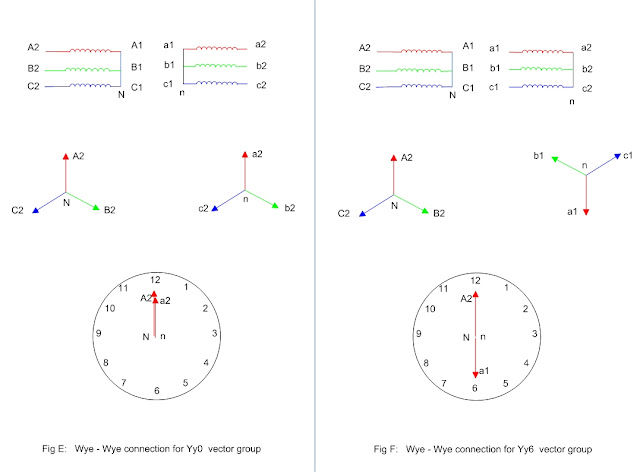 Transformer connections are categorised into four main groups as tabulated below 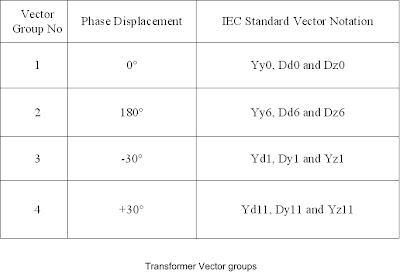 Also transformers in group1 and group2 cannot be operated in parallel as there is 180 degree phase difference between the two secondary windings. This can only be rectified by changing internal connection.

where is vector diagram

This tutorial is very useful. I had a question regarding a YNd9 connection. If I'm right, the coupling of this connection is the following:
AN - cb
BN - ba
CN - ac

What surprises me is that I thought the following relation was always true:
EAN / Ean = EAB / Eab

It seems that this is not true for the YNd9. I can't seem to explain why. In other words, I thought we could do the clock convention from the line-to-line voltage.

Any comments on that statement?

I read your post. Really it's a interesting post by you.Thanks for all the reviews you write about Voltage Transformer. This are more helpful for all.

Really useful but no zigzag connections??

Could anybody explain to me Dyn5 vector notation? Some transformer manufacturers are using this vector group.

can any one tell me what is the requirement of phase differences in between the primary & secondary windings of transformer, is it possible to design a tranformer having vector group YNd0 or Dyn0.
Plz reply

This was really useful.. Thank you very much..!!!

thanks dear this is very usefull to all

thanks dear this is very useful to all friends

from delta- wye connection stepdown of transformer, can i use wye connection in the secondary side with floating neutral? will it be critical to equipment?

It is not possible to have zero phase difference with YNd or Dyn windings. Use YNyn or Dd windings.
This should not be needed if all transformers are the same vector group.

manufacturers and suppliers of electronic transformers in Bangalore

Standard Transformers is a private limited company engaged in manufacture, testing of Transformers & Rectifiers Stabilizers in the voltage class.

Hi,
Thanks to you for share tips and knowledgeable information about transformer.

this was great...thank you so much.

Best explanation, I have seen

Can Ynd11 transformer be used as a replacment for Dyn11...what will be the consequences?

how about for single phase.. pls anybody can help me

Thanks mate, this is useful information that I need to know and is not covered in my textbook.

pls give idea in single pase

Extremely helpful.. Thank you very much.. :-)

This is good keep it up bro

thanks a lot for this tutorial..

Very nice explanation Sir.
Thank you so much.

Can someone explain how to identify the vector group looking at the winding connections. In the reverse, how to connect the 3 phase windings for a given vector group, taking an example of Yd11 or Yd1 shown on website. I will be grateful.

Hai everybody is anybody knows about the Yd11:40 and Yz0:20 vector group in VFD Transformer so please explain me that what is :40 & :20 is stantes for can any one can explain and I also if u have any related documents please send to my mail ID is santhosh10923@gmail.com

Plz can anybody say.how to check vector group in site without having R & D name plate... please share Ur voluble knowledge..

Thanks for elaborating on Transformer Vector Groups. These diagrams have made it easy to understand the connections with simple easy methods.
Power transformers in India | Toroidal transformer in India