Here our brief discussion will be restricted to high voltage insulators used in transmission lines and substations.

The HV/EHV insulators are broadly divided into two types based on the material used. One is ceramic and the other is polymer (composite) insulator. In Fig-A is shown the sketch of a porcelain disc insulator unit and in Fig-B is shown a glass disc insulator. 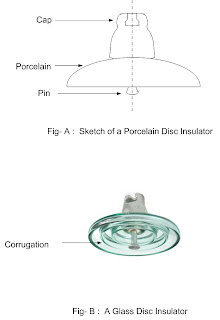 Below are few definitions in relation to insulator that one should know which are required here to understand some concepts.


Creepage Length -The creepage length is the shortest distance between two metallic end fittings of insulator along the surface of insulator . In the string of insulators for creepage length calculation the metallic portion between two consecutive insulator discs is not taken into account.
The corrugation below the insulator is for the purpose of obtaining longer creepage path between the pin and cap. The corrugation  increases the creepage length so consequently increasing resistance to the insulator leakage current. The leakage current that flows through the surface of  insulators should be as little as possible.
The creepage distance required  in clean air may be 15 mm per kiloVolt (line voltage). In the polluted air depending on the level of pollution of air the required creepage distance increases.

Flashover voltage - The voltage at which the air around insulator breaks down and flashover takes place shorting the insulator.

Puncture voltage - The voltage at which the insulator breaks down and current flows through the inside of insulator. 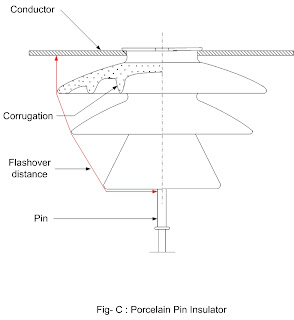 Insulators of different design are available for different applications some cases are outlined below.

The suspension insulators are used to support conductors in high voltage transmission lines. The suspension insulators string used in transmission lines are obtained by joining several disc insulator units. according to the type of hardware fittings, usually two varieties of disc insulators are used in HV transmission line. These are cap and pin type and ball and socket type. A porcelain cap and pin disc insulator is shown in Fig-A. Also in Fig-B is shown a glass disc insulator. In the porcelain insulator the somewhat umbrella like upper  part called skirt is glazed and smoothened so that when it rains the dust and salt deposited on it are easily washed away. The contaminants cannot easily penetrate the glazed surface. When it rains the lower corrugated part does not wet and remains dry. This dry portion is the effective creepage length in wet condition.
In the transmission line a string of disc insulators are formed by fitting the pin of one disc to the cap of next disc. Simply by adding more  numbers of discs in the string the insulator string is used for higher voltage. Moreover when one disc is damaged only that particular disc is replaced not the whole string. 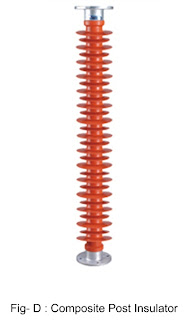 I am using polyurethane and I have found it really useful for insulation. What do you say about it .. ??

It feels great to drop by here on your site. Lots of information i have gathered here. Thanks for providing!

This blog is very good and efficient with what it does. You give detailed explanations on your posts which make people to understand so much about high voltage insulator in electrical engineering.
Kingwood electrician

insulator is very important with the high resistance in the factory and godown for better reliablity for doing work and safe as precaution ,keeping them in mind. For good quality , it may need a little smart thinking before purchasing them.

very sound article. Thanks for clearing my confusions on insulators

Would like to know your local agency or representative office in Malaysia. Thanks.
I am interested in polymeric insulators for TNB 132kV and 275kV transmission lines. Thanks.

Is there any specific number of insulators to be present for 33kV ,66kV etc..
How to visually tell the transmission voltage by looking on the overhead line insulators?

Thanks For Your valuable posting,this is for wonderful sharing,i would like to see more information from your side.i am working in Erp Software Company In India

I get my answer properly from this website.
Thank You......

Wonderful knowledge have been obtaining by me....

I have read your blog its very Interesting and informative. Register Your Events Today in Simple Steps.online events registration. We help to integrate the student Community and Colleges / Universities to publish event and provide updates of other Campus Events around the globe.National & International conference

I'm happy to read this article.Thanks for your information! Keep sharing..
erp in chennai

Thank you for this valuable information. I have got some important suggestions from it. I'm working in Brave Technologies Private Limited. web design company chennai

I like the post format as you create user engagement in the complete article. It seems round up of all published posts. Thanks for gauging the informative posts.
cara menggugurkan hamil

Thanks for sharing amazing information !!!!!!
Please keep up sharing.

Marvelous article! I need individuals to know exactly how great this data is in your article. It's intriguing, convincing substance. Your perspectives are much like my own particular concerning this subject. camping generators

Hey, Wow Provided Post will be Very much Informative to the People Who Visit this Site. Good Work! Thank You for Sharing.
Trading erp software in chennai

This blog is very much helpful to us. Thanks for your information

I am thankful to this blog giving unique and helpful knowledge about this topic. Shipping from China to US

Its really an Excellent post. I just stumbled upon your blog and wanted to say that I have really enjoyed reading your blog. Thanks for sharing....

thanks for your extrodinary services , go ahead
Scaffolding dealers in chennai