Like any physical system, the Electrical Systems also work based on some well defined principles. For the study of the characteristics of any system, device or element, the block diagram notation (as shown below ) is used universally.

In the figure the element or system is represented by a rectangular block. Naturally the device will receive some input and give the output. The arrow is shown to represent the direction of input and output signal flow.

Basically any system can be  reduced to this simple form for studying its behavior.  When the block diagram represents a single element or simple device then instead of 'input' and 'output' we better use the terms 'cause' and 'effect'  respectively (even the terms 'excitation' and 'response' are equally used).  For example the cause may be voltage applied across the element and effect is the current that flows in the element. Here we will mainly use the terms 'input', 'output' and 'cause', 'effect'. I feel that the terms excitation and response are more specialized. Here we also use different terms like element, device and system interchangeably to satisfy people of different mindset. It should be remembered that these terms are not exactly of the same meaning. For example different elements or devices may be connected in a particular way to form a system etc.

The simplest way of studying the behaviour of a element or system is by applying a series of inputs and observing the respective outputs. That is what is our approach here.

When the input(cause) and corresponding output(effect) are tied by the rules of linearity, then the device or system behavior is said to be linear, otherwise nonlinear.

Then what is exactly this linearity ?

Now join the points by smooth free hand curve, the result is figure-B(ii). The more points we take, the more accurate will be the curve.
Depending on the device behavior the curve of input versus output can be of any shape. some more cases are shown in fig-C(i) to (iv). 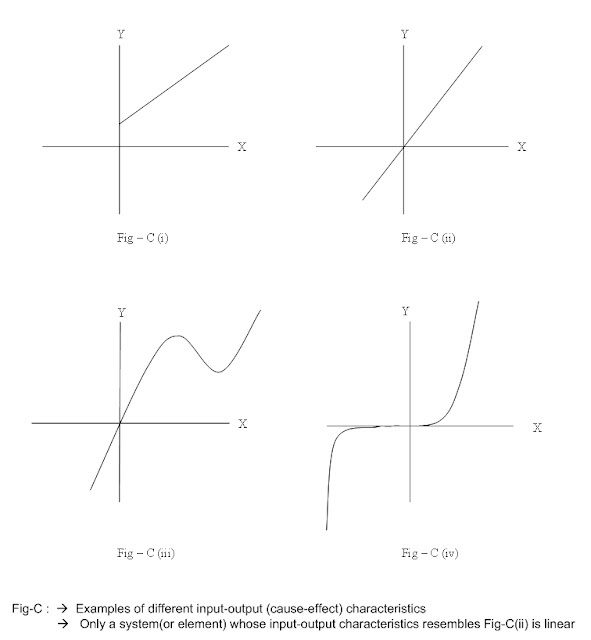 Each of the curves may fit to some mathematical linear or nonlinear equation. For many devices the  relationship between input and output can be found directly analytically.

Remember that the graph (or curve) is drawn with input( X axis) versus output (Y axis) ( not input vs. time or output vs. time).


If a system or device or element satisfy the following two properties then it is called linear.

Suppose when  x1 input is applied the  y1 output is obtained,

and when x2 input is applied the y2 output is obtained.

Now, if input applied is (x1+x2),  then the output obtained will be y1+y2 .
(equivalently we say that if x1 and x2 are applied simultaneously then out put will be the sum of the
outputs obtained individually)
when  x1 is the input  applied the  y1 output is obtained,

Then if  (kx1) input is applied, then output obtained will be ky1. Here k is any real number.

By examining all the input(X) vs output(Y) curves one can be sure that above two properties will be satisfied by only curve c(ii).
The equation of this curve is in the form y = mx. Here the constant 'm' may be any real number.

It is easy to remember that the input vs. output characteristic curve of a linear device should be straight line passing through the origin (center). Only in this case the above two laws of linearity are satisfied.

Now is the time to consider few examples. The best example of a linear element is an ordinary resistance. If the voltage applied across the resistance is 'cause' and current flowing through the resistance as 'effect'. Then the graph of voltage versus current is a straight line (Ohms Law) passing through the origin. see fig-D. You can verify that it satisfies the linearity laws. 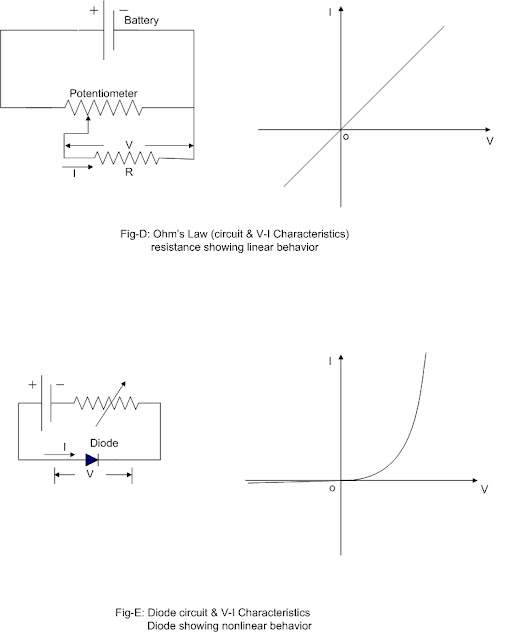 The next example is the simple Diode circuit (Fig-E). Look at the voltage versus current curve here. Although it passes through the origin it is not a straight line, hence one can immediately say that it's a nonlinear element.

Now we will consider the example of a magnetic circuit.

Consider the magnetic core in a transformer. Due to the current 'i' applied in the coil surrounding the core, flux     'phi' is established in the magnetic core. A curve is drawn between field intensity and flux density. The arrow direction in the curve indicates that two different values of flux density obtained for same value of field intensity, one is for when the excitation current is increasing and other when the excitation current is decreasing. The o-a-b path is only at  beginning of magnetisation. This type of behavior in magnetic circuit of transformer is called hysteresis. The closed loop formed by the curve is called hysteresis loop. Now just looking at the diagram one can be sure that the field intensity vs. flux density curve is non-linear. 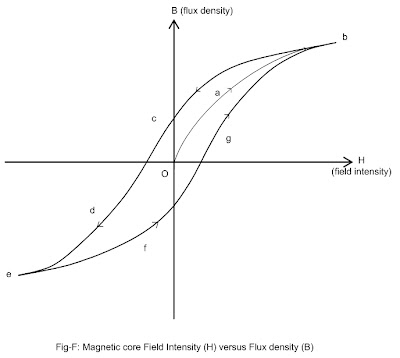 This non-linearity in transformer characteristic gives rise to harmonics, which requires some techniques to handle.

Nonlinearities are often encountered in electrical devices and systems. Most of the elements show non-linearities to some degree beyond certain input range. There are some methods to deal with the nonlinearities. We can also say that every element or system behaves like a linear element or system within a small range of input variation. For small variations of input around the operating point, the curve can be approximated by a small straight line. The middle of this small straight line is to be treated as origin. See Fig-G. In the figure the portion a-b can be treated as linear and Q as operating point.

The truth is that in real world sometimes even the systems with much pronounced nonlinear characteristics is analysed using linear techniques. this is because the variation of system input and output is small enough around the operating point. 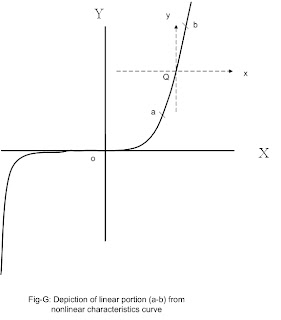 (While solving problems considering small changes around the new origin 'Q', we only concern about 'x', 'y' and 'Q', forgetting original 'X', 'Y' and 'O')

Consider the characteristics of a transistor (see Fig-H). The output 'Ic' versus 'Vce' (collector to emitter voltage)   is drawn for different values of base current 'Ib'. 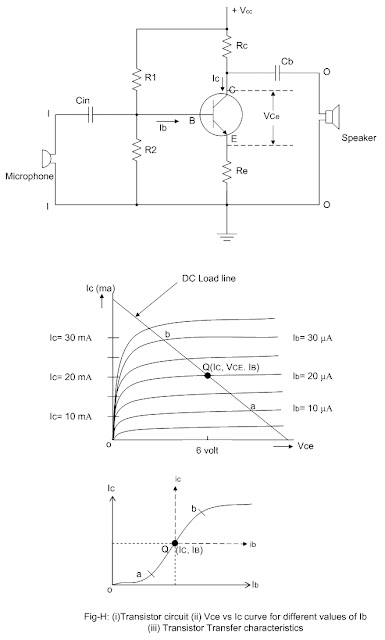 Examining the transfer curve (between Ib(cause) and Ic(effect)) it is clear that the curve of Ib versus Ic is non-linear. Close examination reveals that the curve seems to behave linearly in part of the curve (point a to point b). Then our aim is to fix 'Q' in such a position so that the variations ib and ic around Q lies within this linear region.

Then why do we need this linear variation? Yes, in the linear portion the output wave shape is not distorted. That means the shape of the wave is preserved. Operating in somewhat linear range gives birth to very little noise.

This is one important reason why we need the biasing in the transistor and set the quiescent point Q.

So actually whether you apply input (ib) or not, IB,IC and VCE are always present as long as Vcc battery is connected as shown. These are the quiescent point values due to biasing, which helps the transistor operate in linear range.
From the total collector current Ic,  the output ic is filtered out using a capacitor or signal transformer.

So, we applied ib and got ic. However ic is several times ib and so we got ic as amplified version of ib.

The linearisation method is used in many situations. This technique is also helpful in power system small signal stability studies and other small signal oscillation studies.