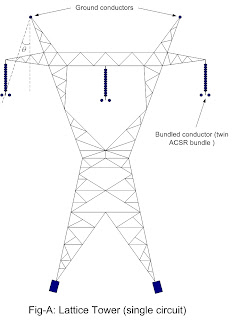 In many cases due to public resentment  the use of lattice structures has been restricted. So alternative transmission structures are adopted by some power companies.


Steel tubular pole structures  have been used quite successfully by some power companies for high and extra high tension transmission lines.  The installation of these structures are costly but requires less time. See the sketch of a tubular steel pole structure (Fig-B). The tubular structure can be a single tubular form or H-form. Like Lattice tower it can also be designed for carrying two or more circuits. A lattice tower with double circuit is shown in Figure-D. More transmission companies are considering the use of this type of tower especially in populated areas. 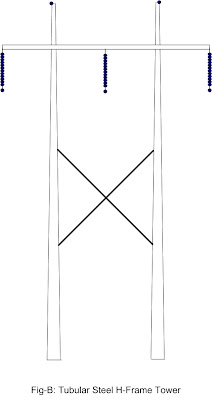 The lattice guyed-V transmission towers has also been used by the transmission companies in cases where more space is available.. These are simple, easy and cheaper to install. The guyed towers also require less time for installation. The main disadvantage is that these towers require more space due to presence of guy wires. See the sketch of the tower (Fig-C). This tower uses two string insulators per phase arranged in V form. 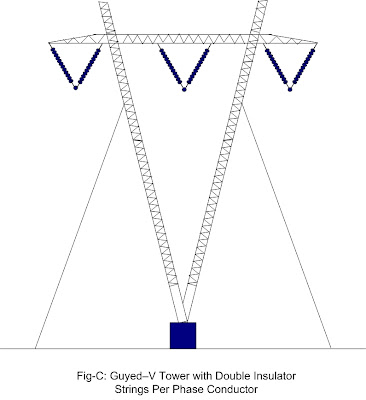 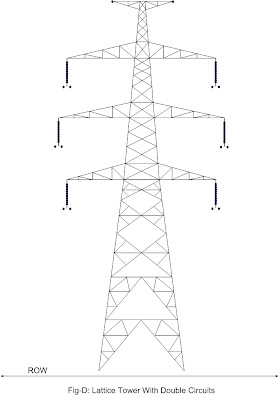 Even concrete poles/towers are used by transmission companies of some countries for HV/EHV power transmission.

Another main classification is from the point of view of functioning of tower. That means whether the tower is suspension type, angle type or dead end type. Depending on the deviation angle of the line the respective tower is chosen. The suspension type of towers only carry the load of the conductor in normal situation. However suspension towers are usually designed to work satisfactorily for very small angular deviationn of line. The standard code of practice of different countries has specified the maximum deviation angle for use of suspension towers. The angle towers are used when the line route deviates more than this specified maximum angle. The angle towers can again be sub grouped for different ranges of angular deviation. So the towers can be categorized as small angle, medium angle or large angle towers. The towers used at the termination point of line are dead end towers and are designed to carry large unbalanced load. The dead end towers are the strongest and heavy. In practice large angle towers are designed so that they can be used as dead end towers. Doing so will eliminate the need for designing one more tower type that is dead end. The angle towers use tension insulator strings. See the picture below. 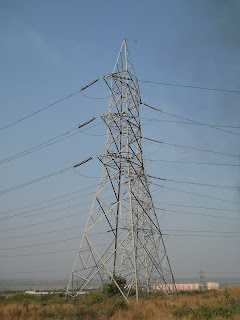 
From the above discussion it is clear that the choice of transmission tower types depends upon several factors. Also you must have observed that when the tower carries only one circuit then the phase conductors  are usually arranged horizontally(or triangular form). In this arrangement more Right Of Way is required but the tower height will be less, resulting in saving in tower materials so tower cost is reduced. When the transmission tower carries two or more circuits, then the phase conductors are usually arranged vertical (See above photograph and Fig-D sketch). In this configuration the requirement of Right Of Way is less but tower height is more. Usually this is the choice in double or multi-circuit case.  Sometimes double circuits are also arranged horizontally and single circuit vertically according to the availability of Right Of Way and optimized total cost.

The type of tower foundation depends on the soil type where the tower is to be erected. Some common  foundation types are for dry soil, wet soil, rocky soil, sandy soil and submerged type. In most cases existing standard design can be adopted to reduce the overall cost of tower installation. In the earth quake prone areas, data pertaining to seismic activity  of the area is very important for consideration in foundation. The foundation cost on river bank or river bed is much more than on plain land.

The design of transmission tower and line is complex which need to consider loading under different conditions. Several softwares are available in the market for the analysis and design purpose.