In the diagram the distributed capacitance also automatically requires that the line impedance also distributed. It should be clear from the above figure that in general throughout the length of the line the voltage and current values may vary. 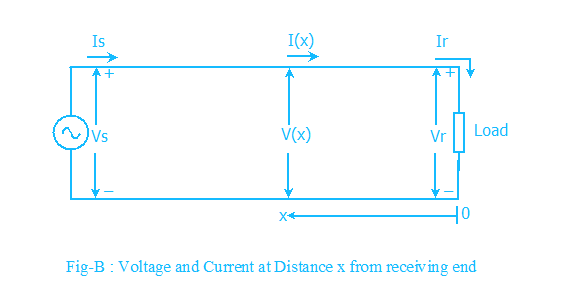 If you compare the above equations relating sending and receiving end voltage and current with the corresponding equations discussed in last article for medium length lines then we can easily find ABCD parameters. These are 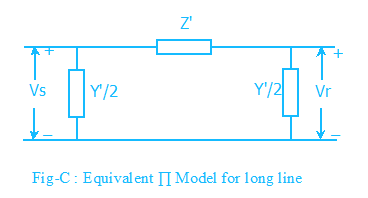 It is left as an exercise for you to find Z' and Y' by comparing with Medium length line.


As already said Zc  and γ  are complex numbers.

Let us consider a case when the load impedance is just equal to the characteristics impedance Zc   then, the receiving end voltage  Vr  =Ir Zc
substituting in above equations we get

The magnitude of voltage is

At the sending end the voltage is

is the phasor and only provides phase shift between the voltages at receiving end and at a point x distance from the receiving end. Similar argument can be made for equation of current I(x).


In the above formula of Zc and γ  we put Z(series impedance) and Y(shunt admittance). (recall that Z and Y are the values per unit line length)

Observe that for loss less line, Zc becomes a pure resistance. We also know that γ  = α+j β,  for this loss less situation we get

As in case of lossy line here also at any distance x from receiving end the ratio of voltage and current is always same that is Zc, the surge impedance of the line. Using the complex algebra you are sure that the magnitude of V(x) is Vr and I(x) is Ir. Which means that for loss less line the voltage and current at any distance x from the receiving end is same. It also implies voltage at sending end is same as voltage at receiving end which is same as voltage at any intermediate point. So Vs = V(x) = Vr. At Surge Impedance Loading the reactive power generated by the line capacitance is equal to the reactive power absorbed by the line inductance for every unit length of line. In Power industry it is said that the voltage profile is flat. So we conclude that for a lossless line the voltage magnitude is same throughout the length of line. As in case of lossy line the term

is the phasor responsible for phase shift. It is simply giving phase shift to the voltage wave along the length of line. The phase angle between sending and receiving end voltage is

. It is clear that if the distance between the sending and receiving end is more then the phase difference between the voltage phasors at both the ends of the line will be more.


In previous articles we already discussed that in case of transmission line how and when we can ignore the line resistance R and  leakage  conductance G. At least for rough estimate of the load carrying capability of transmission line we can presume it lossless. The surge impedance loading is the ideal loading of the line, which is desired keeping in view of the optimised (flat for lossless ideal case) voltage profile of the line.

For Loss less line the surge impedance loading (SIL) is

It should be recalled that Zc is pure resistance for lossless line.

Vr and Vl are the receiving end phase and line voltage respectively.

System planners usually use line loadabilty curve for deciding loading capability of the line. See Fig-D. The relationship between SIL and length in km shown in Fig-D is almost same for all voltage levels. 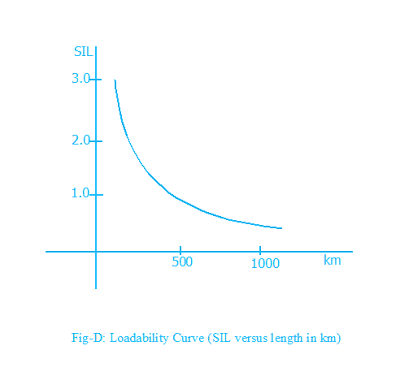 What is the capacity of the transmission line or how much power it can carry. The power that a transmission line can carry are based on three factors. These are
Due to the current flow heat is generated in the line and the line length changes which gives rise to more sag.  Sometimes heating of the line is enough that, later cooling of the line due to less load or environment factors does not make the line regain its actual length. The sagging become permanent. Due to this the minimum clearance of the line to ground decreases which may violates the standard set by the local authority. Also if the load is very high the conductor may be damaged due to excessive heat. All transmission lines has thermal limits. But the thing is that only short lines can approach this limit. Voltage drop and stability limits situation usually do not arise here due to short length. Lines less than 80 km length falls in this category.

In both lossy and lossless lines it is clear that phase difference between sending and receiving end voltage arises. This angle is called power angle. The power that flows from sending to receiving end depends upon this angle and the magnitude of Vs and Vr. (The magnitude of a phasor V is represented as |V| )

The simplified formula for this power (P) transmitted is

X is the equivalent series reactance(ignoring resistance) of the line.

To increase the power to be transmitted, this power angle δ may increase up to 90 degrees. Increasing slightly further, the line becomes unstable and lose synchronism. It is a good practice to operate the lines with sending and receiving ends phase differnce angle (power angle) less than 30 degrees.  Doing so, if in emergency load generation disbalance in adjacent areas occurse this line can take more load by increasing this power angle, so avoiding instability. So operating below 30 degrees we keep more than 60 degree angle margin. From the above formula you can say that if X is made smaller and smaller for any fixed small δ ( small sin δ  imply small δ)  then more power can be transmitted. Hence it is clear that small line reactance X is desired. This small reactance which cannot be made arbitrarily small by line design, definitely limit the power transmission in line.  This loading limit for transmission line is quite less than thermal limit.  So the long lines cannot approach thermal limit, before that other limits come to action. This small power angle corresponds to quite lesser load carrying capacity in comparison to thermal limit. Effort is made by power companies to push the limit towards thermal limit by employing reactive compensation so reducing effective series X further.